Watermelons were a significant commodity handled by our conductor.  Here are watermelons being loaded at the end of the line at Falfurrias.  Though SA&AP 8247 does not make an appearance in the book (unless I missed it), cars in this series in watermelon service do.  Watermelons were destined for diverse destinations such as small Texas towns like Palacios, big cities like Chicago, and far off locales such as Rawlins, WY.  UTSA Special Libraries Digital Collection 073-0781.

For help deciphering station numbers, use the SA&AP timetables from wx4.org.  Also note that the conductor wrote the “picked up” and “left at” stations one column to the right of where they are labeled in the book.

Side track diagrams of all the stations can be found at T&NO Archives.  Check the Houston Division for Cuero to Yoakum and Houston, and the Victoria Division for everything else.

Working out of Yoakum Texas in 1926

1926 in South Texas was an interesting time.  This book is from an unfortunately unnamed conductor working the former San Antonio & Aransas Pass railroad.  One year earlier and the SA&AP would still be independent.  One year later and the SP’s extension from Falfurrias into the Rio Grande Valley would be complete, changing traffic patterns.  And so 1926 represents a brief unique period in the region’s railroading.

The engines and trains have been renumbered, but otherwise much has remained the same on the SA&AP since the SP acquisition.  Former SA&AP power pulls the trains and the cabooses are still lettered for the Aransas Pass.  I believe SA&AP employees held protected seniority on the former SA&AP routes so the trains are still probably crewed by SA&AP crews.  The times are quickly changing but this 1926 book gives a late look at an era that is about to end forever. 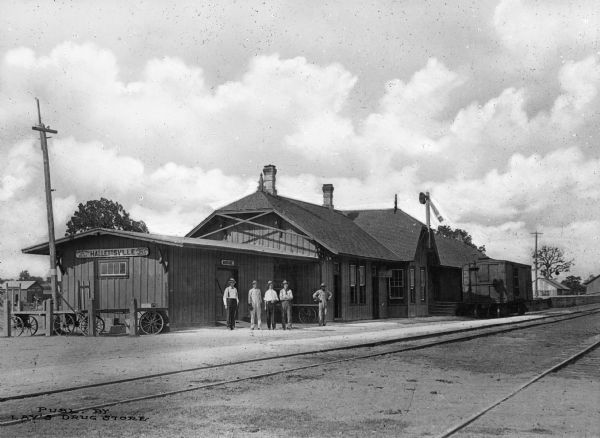 Hallettsville on the Houston Line.  Inbound carloads included flour, feed, cottonseed, and a tank car of oil.  Merchandise boxcars were also handled to and from the station as seen in the photo.  Wisconsin Historical Society Image 72487.

Our conductor’s trips begin working between Yoakum and Houston (specifically Southern Pacific’s Englewood Yard) on trains 385 and 386.  These trains performed mostly local work, and if they continued SA&AP practice, operated in each direction three days a week.

After working a few turns on the local, the conductor made a few more trips to Houston on extras and one trip on train #392.  Train #392 is tantalizingly close to SA&AP train 92, suggesting SP just added a “3” to renumber the SA&AP trains, but in most cases the pattern doesn’t hold.  Although most of these trips are on extras, my guess is there was a through train scheduled in each direction between Houston and Yoakum.  These trains may have been run as extras for dispatching convenience.  But there are definitely large quantities of through traffic moving between Yoakum and Houston that isn’t handled by the locals 385 and 386.

The rest of the trips are mostly spent working south out of Yoakum on through trains #357 and #358 to Alice and return.  These were the Mexico Specials #95 and #96 in the 1924 SA&AP timetable.  In later SP days, #357 and 358 were the long standing trains working the south end between Alice and the Valley, but that is not the case in 1926.

Much of the cattle shipped from the SA&AP was bound for Fort Worth, as evidenced by the Aransas Pass stock cars above.  University of North Texas Library, Portal to Texas History photo.

As expected, cattle was a significant commodity handled, and our conductor worked a cattle special bound for Kansas City on June 10th.  Kansas City and Fort Worth were the most common destinations, but carloads also went to San Antonio, New Orleans, and Laredo.  Interestingly, Gravis on the TexMex  also received multiple carloads.  I would expect that these cows were moving for grazing, but to my uninformed mind, summer doesn’t seem to be the right season to be moving cattle to South Texas pastures. 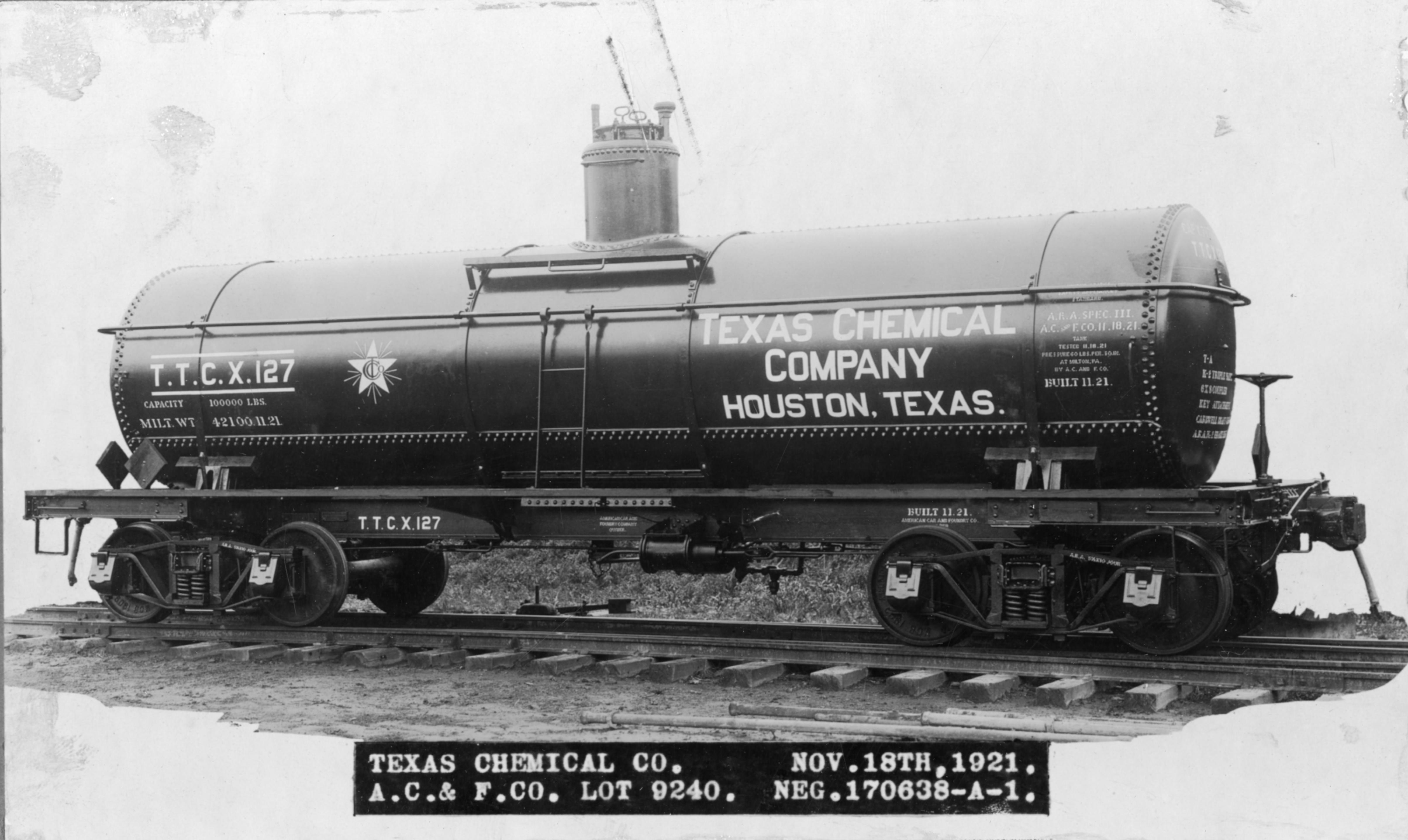 TTCX 153, probably similar to this car, was in Train 357 on July 13th probably carrying a load of sulphuric acid to the Misko oil refinery at Mirando City.  TTCX 157 made the trip on July 23rd.  TTCX 158 and 159 were bound for Laredo on July 25th.  John W. Barriger III National Library Flickr page, AC&F photograph collection.

Oliver Killam discovered oil near what would become Mirando City in 1921.  By 1923, an oil boom was on, and he soon established the town of Mirando City, oil loading facilities on the Texas Mexican Railway, and the Misko refinery in Mirando City.  The town’s furious beginning is well represented in the book by inbound loads of building supplies such as cement and lumber and pipe for the developing oil fields. 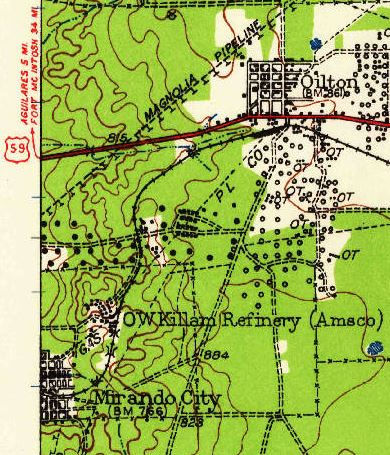 More importantly for the TexMex and the SA&AP, there were large volumes of oil being shipped to be refineries in Houston and lesser amounts to other destinations.  Below is an excel spreadsheet of the northbound oil loads and empty tank cars returning to Mirando City:

The oil shipments appear to be grouped into two primary movements.  The largest is oil presumably bound for the Crown Petroleum refinery in Pasadena (near Houston) which produced lube oil and gasoline.  These shipments moved in a mix of UNCX / CCPX Crown Petroleum, QTX Quaker City Tank Line, LDLX / LREX Liquids Despatch Line, and TWTX The Wheatcroft Company tank cars.  The TWTX Wheatcroft tank cars are interesting; this tank car line only owned 50 tank cars and it appears most or perhaps all of them were in this service at the time.

Crown Central Petroleum refinery in the 1920s from pasadena.chevron.com.  Additional aerial photos from 1945 can be found here and here from SMU Libraries.

Another group of oil shipments moved in CYCX Conley Tank Car, NdeM National Railways of Mexico, and SA&AP / T&NO tank cars.  These were bound to various small towns throughout Texas.  I’m not sure if these were possibly refined products from the Mirando City refinery.  That would normally be my guess, but the conductor does make distinctions between oil and lube oil or gasoline on other carloads, and these are listed as oil.  But I’m not sure why small towns would receive sporadic shipments of crude oil.

Mirando City depot probably when newly built (early 1920’s I assume).  A boxcar of merchandise is spotted at the platform, the culmination of many railroaders’ efforts including our conductor.  Wish I could find a picture of the refinery and oil loading racks!  Webb County Rootsweb page.

Some of the same car numbers make repeated trips.  And turnaround times were fairly quick.  For example, a block of empties arriving in Alice on the morning of July 28th were already reloaded and headed back for Houston the evening of July 30th.  I would like to compare cycle times like this with the utilization of tank cars today!

Merchandise or less than carload traffic was one of the significant commodities handled at the time, in larger quantities than I would’ve expected.   Many online towns received full carloads of merchandise set out, and some such as Beeville, Cuero, and Tynan often received multiple cars a day.  Laredo and Alice were the largest destinations.  As expected, fewer cars were originated online, as manufacturing in this region was limited.  But a few stations did originate cars such as Hallettsville and Eagle Lake.

A 1922 Sanborn Map for Yoakum shows a Reloading Shed at the freight station, supporting that Yoakum was serving as a LCL consolidation and sorting location for points on the SA&AP.  From the Library of Congress.

Perhaps more interesting than the destinations is the insight the book provides into the SA&AP’s merchandise service design.  Yoakum appears to be the hub of the service, but it is not a centralized sorting facility that most traffic flows through.  Rather, both Houston and San Antonio originate carloads for various destinations.  My guess is that traffic bound for stations without enough volume for a full carload is routed to Yoakum, to be consolidated into full carloads or handled by way cars.

The Cotton Belt established a St. Louis to Laredo merchandise car in 1921, routed via Waco to the SA&AP.  Based on the number of Laredo cars operated from Yoakum, it is probable this car was still operated in 1926, though it cannot be definitively confirmed by the book.

The above map shows a typical day’s merchandise movements.  Traffic varied by day of week, with Monday having many fewer carloads, reflecting diminished loading “upstream” over the weekend.

Kenedy was an important location for San Antonio originating traffic.  Cars bound for points further south were set out and picked up by #357; carloads for points between Kenedy and Yoakum were handled by #358.  It is important to note that I am assuming Kenedy traffic came from a connecting San Antonio train, but some of it may be locally originated traffic or traffic from Corpus Christi.  For example, the San Antonio – Yoakum carload shown on the map may actually be a Kenedy – Yoakum or Corpus Christi – Yoakum carload.

Most trains to Alice carried a carload or two of automobiles bound for Laredo.  What isn’t clear is if some of these autos were bound for Mexico.  Laredo probably had around 25,000 people in 1926 so many carloads were probably bound for the local market.  But the US did export nearly 10,000 autos to Mexico in 1926, which would represent roughly 2500 carloads if they all moved over land.  So it is certainly possible that some carloads are bound for Mexico, whether interchanged at Laredo or unloaded there and distributed to Mexico by other means.

US passenger car exports to Mexico, from Commerce Reports Volume 3 Issue 36 dated September 3rd, 1928.  While Mexico was still a large market, US exports to Mexico fell by nearly half between 1925 and 1927.

There is much more that can be learned from the book.  For example, some of the northbound #358 consists include blocking notes for Yoakum, giving some insight into yard operations.  Some interchange locations are notated as well, including empty auto cars returning via the IC at Shreveport and the Y&MV (IC) at Baton Rouge.  And there are many other commodities I haven’t examined, as well as arrival and departure times.

If anyone has employee timetables for 1926, I would love to see them.  And as always additional information, insights, and corrections are welcome.  Thank you!