Conductor Harry Rockwood’s log book gives the consists of Milk Trains 7 and 8 between Alburgh and Ogdensburg that he worked.  There was still a good milk business with most trains handling around 7 milk cars along with the combination car and coach.

Here is an example trip, departing Alburgh for Odgensburg on train 7 and returning on train 8 the following day: 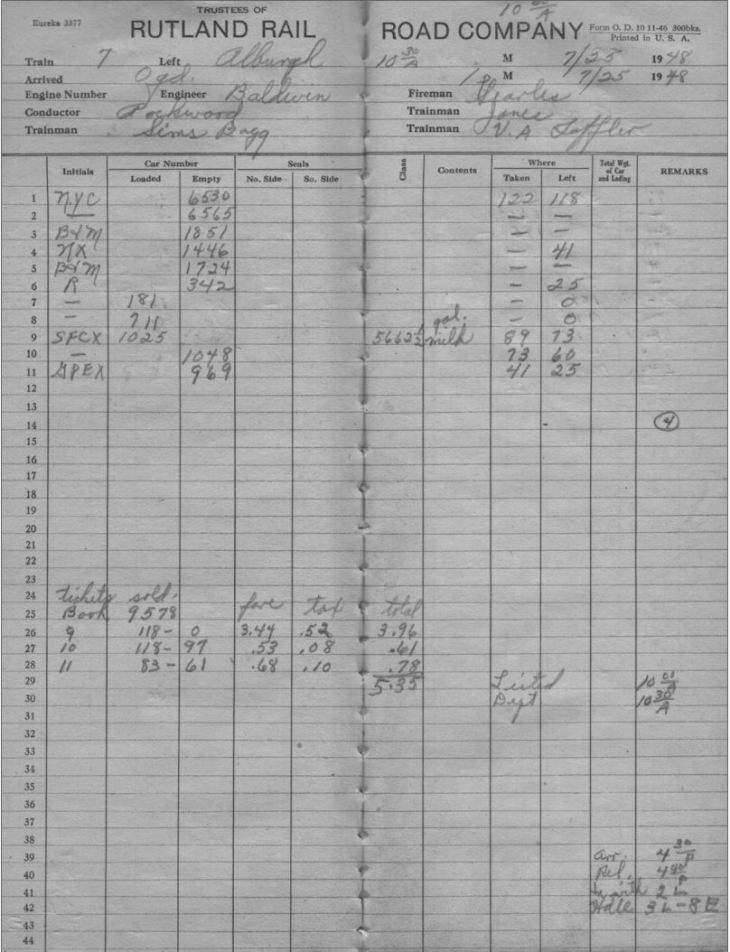 In some places Conductor Rockwood used station names, and in other places station numbers were used.  You can find a list of them here or use a timetable as they are based on the miles from Ogdensburg.

Train 7 departed from Alburgh with five empty milk cars, the combination and a coach.   Three empties were left at Rouses Point, two at North Lawrence, and one at Norwood.  There are two interesting moves documented here as well.  SFCX 1025, a load of milk, was pulled from Ellenburgh and moved to the Sheffield Farms condensed milk plant at Chateaugay.  This is an exception to the typical pattern of milk loads south to the big cities, and empties returned north upstate.  This move is noted in both R.W. Nimke’s book and Railway Milk Cars Volume 2.

But Chateaugay was not the only consignee for loads of milk.  Notice the empty, GPEX 969, pulled from North Lawrence and set out at Norwood.  The General Ice Cream plant located in North Lawrence was also receiving milk loads at the time.  This car had been shipped from Norwood to North Lawrence the day before with 5605 gallons of milk.   And similar moves occurred elsewhere in the book, so it was a common move at the time.

Also interesting were the three passengers handled on the train.  Either he did not always record this information, or there were not many passengers riding the Milk!

On the return trip the next day, some of the empties spotted the previous day returned as loads.  Besides the large city destinations of Boston, Hartford, and New York, both North Lawrence and Chateaugay received loads as well.  The SFCX 1025 that had moved from Ellenburgh to Chateaugay the previous day also returned empty to Ellenburg again.  Although Mr. Rockwood worked the next turn of trains 7 & 8, the car does not show on his list the following days.

And there is a surprise at the end of the book.  Conductor Rockwood recorded one of his New York Central trips in the middle of the book.  This isolated entry tipped me off to the owner of this book and his time book as well.