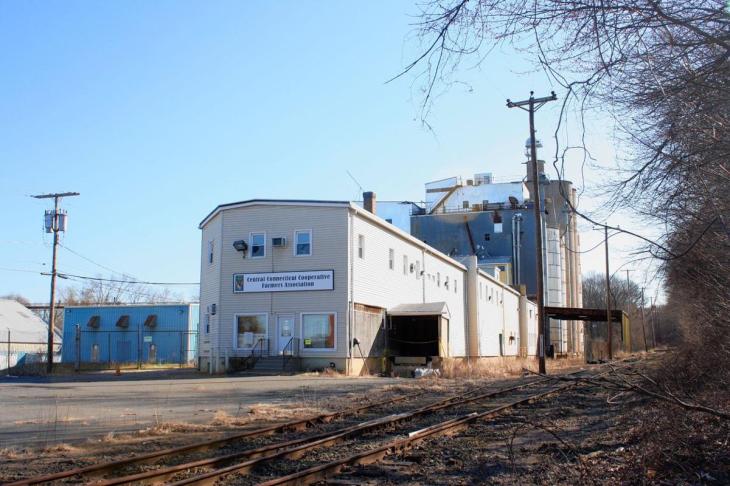 The Central Connecticut Coop Farmers Association, built in 1942, was a large railroad customer until its recent closure in 2016.  Located on the New Haven’s Hartford to Willimantic line, it has been the terminus of the line from Hartford for decades after the remainder was abandoned.

This collection of 1959 Bill of Ladings for carloads destined to the feed mill were rescued from the abandoned Manchester freight house in 1973.  Many thanks to the person who saved them and shared them after all these years.

The dates range from March 30 to August 18, 1959.  During this period there were 179 carloads documented, or roughly 1.5 a day.  Given how these documents were preserved, there is no way to know how complete this sample is, although observers from the time suggest there was a bit more traffic than what is represented here.

During this time period, the Coop would’ve been served by NX-20 based out of Hartford.  A New Haven Railroad Historical & Technical Association forum user posted the following:

I can remember as a kid watching the daily train (NX-20?) come into town 1960-61 with 12-15 cars in the consist every day heading for the CO-OP. Mostly covered hoppers with several boxcars in the mix. The CO-OP at that time had 3 sidings to switch and the Main and Passing track crossover was utilized too. The crew usually switched the other cars in the consist thruout the yard and made the run out to Cheney Mills if necessary first, went to lunch, and then spent the rest of the afternoon switching the CO-OP before heading back to the Hartford Yard. Listening to the RS-3 roar as it shoved the 15 car cut up to the CO-OP would raise the hair on my arms.

By far the largest inbound commodity was corn.  Here are the commodities represented:

The variety of corn suppliers and routings that corn took to get to the Coop is quite interesting.  Some of the corn moved from small locations throughout the midwest to larger terminal elevators and then to the Coop, while some of it came from ships on the Great Lakes through Canadian port elevators.  I am curious how the coop sourced their corn suppliers.  Did a middleman broker the sale between elevators and end consumers such as the coop?  Or did they shop around themselves to find the best combination of corn prices and shipping costs at any given time?

Also interesting to me are the spent grains coming from whiskey distilleries.  A few carloads originated on the Frankfort and Cincinnati Railroad (“The Bourbon Road”) in Kentucky and were routed through Detroit and Canada via the CP and B&M to get to the New Haven, a surprising route to me!

A wide variety of railroads and routings were used, often by the same supplier.  Much of the corn came from Buffalo, but several different routes were used to get to Maybrook Yard.  The spreadsheet file can be sorted by participating railroads for anyone interested in these details.

A few pictures found of the Connecticut Southern working the mill in later years:

And one from Penn Central days: