Round Rock 1904.  Photo courtesy The Portal to Texas History

The above link is a notebook containing a couple months worth of freight cars spotted at Round Rock, TX on the International & Great Northern (Missouri Pacific) for (most days) in July and August 1916.  Some pages are hard to read as the pencil writing can be extremely light.  And some dates are missing.  Sundays were often skipped since no trains worked Round Rock, but there are days other than Sunday missing as well. 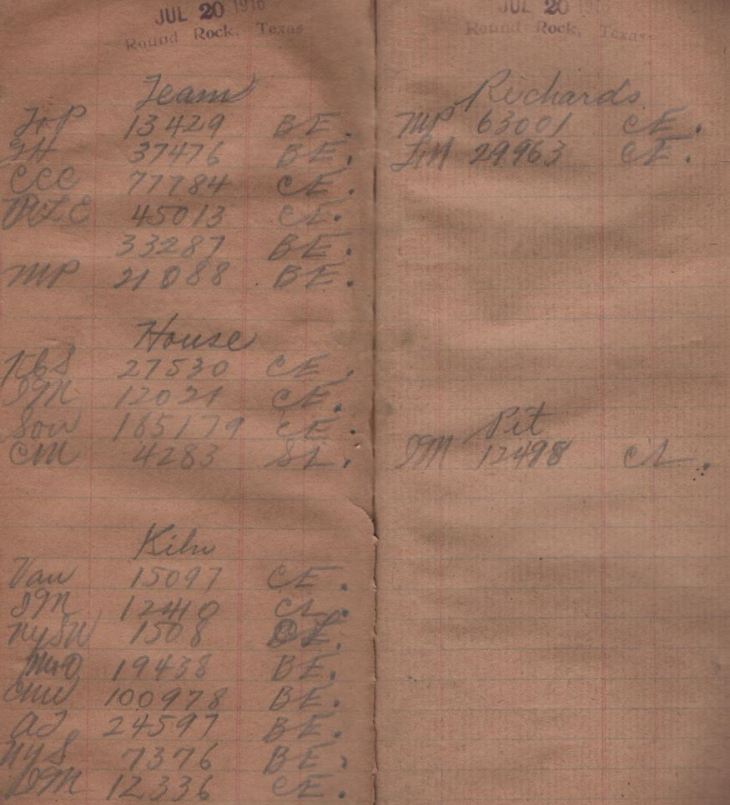 Making Sense of It

So what does this mean?  While the information is far from complete, as there is no commodity or customer information, this book does give a bit of a glimpse of freight traffic in Round Rock.  The reporting marks and car numbers, type of car, load or empty, and the track it was spotted in are provided.  Of course cars may have been spotted in a track for convenience and cars may have been bad orders or temporarily stored so this information is not completely reliable.

The type of car and whether it was loaded or empty is noted for each car listed.  Grab your 1916 Official Railway Equipment Register to learn more about each car.  Above is the page for IGN’s freight cars.

“L” following the car means it is a load, while “E” is empty.  You can follow some of the cars for several days to see how long it took for it to be unloaded.

Above is a 1916 Sanborn map (courtesy of the University of Texas Perry-Castañeda map collection)  for an overview of the depot area.

If anyone has a side track record for Round Rock, it would be much appreciated.  What follows are my best guesses about where each track was. 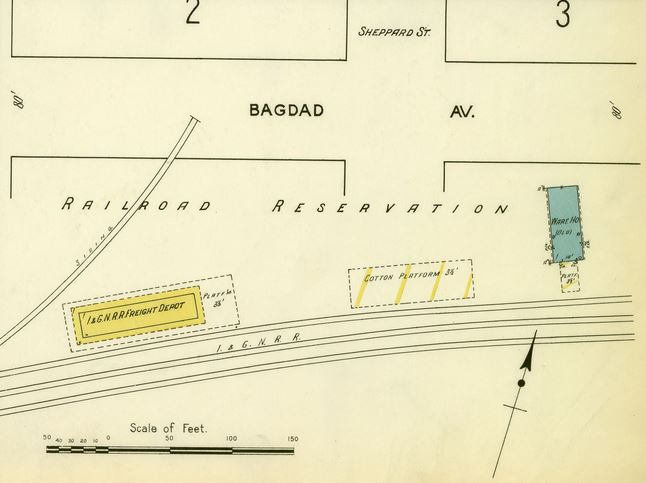 I would guess the house track is the track parallel to the main and the team track is the spur curving behind the depot.  These are of course guesses.

Box cars, coal cars, and a few refrigerator and flat car loads were received on these tracks.  Occasionally, large quantities (around 10 cars) of stock empties would be gathered presumably for an outbound livestock shipment.

The Cotton Gin Spur and the Round Rock Broom factory appear to have shared the same track, which I am assuming is the Gin Spur.  So cars on this track could be for multiple customers, as the gin, a cotton warehouse, and the broom company are located on this track.

Box cars, coal cars, and the occasional flat and stock car were spotted on this track.

As can be seen in this 1925 topographic map, there are several spurs west of downtown and a small spur in Old Round Rock.  I am unsure which is which.  I would guess the Kiln is toward the bottom of the map, and possibly the pit as well.  I have no guess as to what Fio is, and also have not been able to find any references to Richards.

The Kiln and possibly Pit tracks are probably associated with the Round Rock White Lime Company.  Here is a waybill of an outbound lime shipment in a box car.

Richards had mostly coal cars spotted with an occasional flat.  The Pit track was usually a single coal load.  The Kiln track was a mixture of coal cars and box cars.

While the information is far from complete, it does help imagining what a hot Texas day under the summer sun in Round Rock 1916 might have been like.  The silence of a Sunday, the anticipation of a cut of cattle empties arriving, the surprise of finding a Rutland car or some other far away road.  Were those refrigerator cars on the team track being loaded with local produce?  There is still more of the story to learn.

And if your imagination has been sparked, here are a few waybills, mostly from 1906, of shipments consigned to Round Rock: