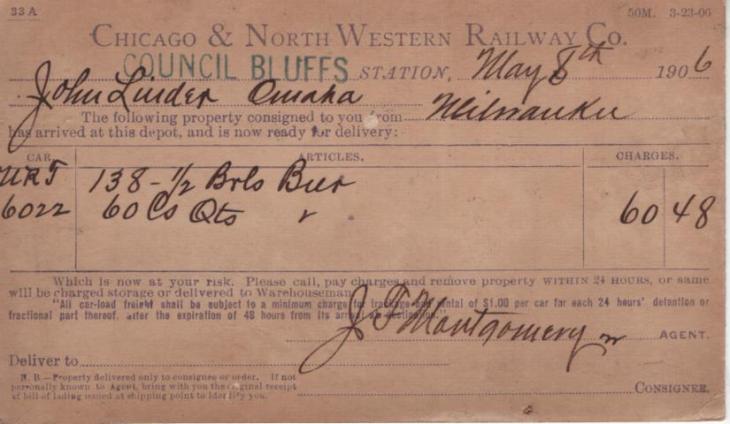 John Linder of Omaha (article possibly about him here) received many carloads of Schlitz beer at Council Bluffs in the early 1900’s.  The postcards notifying him of their arrival suggests the cars were unloaded from the C&NW team tracks in Council Bluffs.  Schlitz was served by the Milwaukee Road’s Beer Line, so the cars must have been interchanged to the C&NW somewhere.

Most of the cars are consistent with Schlitz’s Union Refrigerator Transit Company reefers, some of which were painted with the Schlitz logo.  Car numbers received with reporting marks if given.  The 1905 URT equipment register is on the right.

In addition, there were a few postcards sent to Mr. Linder from Schlitz in Milwaukee, notifying him of Bills of Lading covering empties with car numbers given, and what I’d guess is the number of empty half barrels, quarter barrels, etc. to return in each car.

These postcards give an interesting little insight into the workings of the distribution network of the major brewers in the early 20th century.